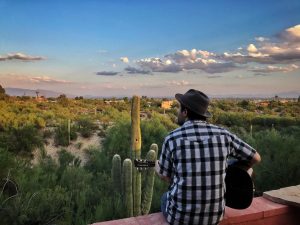 A celebration of music from the frontier of Old Mexico will be held at Rancho de la Osa on Saturday night, September 28. The concert will be staged in the oldest continuously occupied building in Arizona with the music provided by members of the Ronstadt family.

Peter Dalton Ronstadt, a fifth-generation Ronstadt in Tucson, nephew of Linda Ronstadt, and great-grandson of Federico Jose Maria Ronstadt, aims to explore the musical heritage of his family. Along with his band of Tucsonans, “The Company” he paints a musical picture of the American Southwest by presenting music from the region, music from Mexico and new songs that draw inspiration from all the elements of his upbringing.

The concert will begin at 7 PM and there will be a steak dinner before the show. For those that choose to stay overnight, guest rooms are available. There is no admission charge. Rancho de la Osa is located near Sasabe, Arizona. 65 miles South of Tucson.

Rancho de la Osa is one of the most historic properties in the southwest, established by Padre Kino as a mission outpost in 1699. Frequented by numerous notables from movie stars to presidents. Rancho de la Osa has 18 luxurious adobe guest rooms with Mexican antiques and vintage furniture. Guest can stay in the same rooms used by John Wayne, Zane Grey, Joan Crawford or Franklin Roosevelt. A short drive from Tucson, the ranch is located in the high desert of the Altar valley with an elevation near 4,000 feet. Situated along the Arizona/Mexico border between the Baboquivari Mountains and the Buenos Aires Wildlife Refuge, guests at the ranch can participate in old west activities including scenic horseback rides and working with cattle. Rancho de la Osa, a true old west experience.